So, more on the garden, continued from the previous missive.

The vegetable plot was always high on my list of priorities. Visions of the Good Life, eating nothing but produce from our own land, drove me on. I decided on four beds, each 4ft x 15ft, allowing me lots of space but easy access without walking on them. Both of these points proved to be wrong: after planting, the amount of space now seems tiny, and watching The Big Allotment Challenge on BBC2 I saw everyone walking all over their plots anyway…

First step: cutting the turf. I already had a turfing iron (my, what nice flat turf…) from a similar previous endeavour, so should be easy, right? 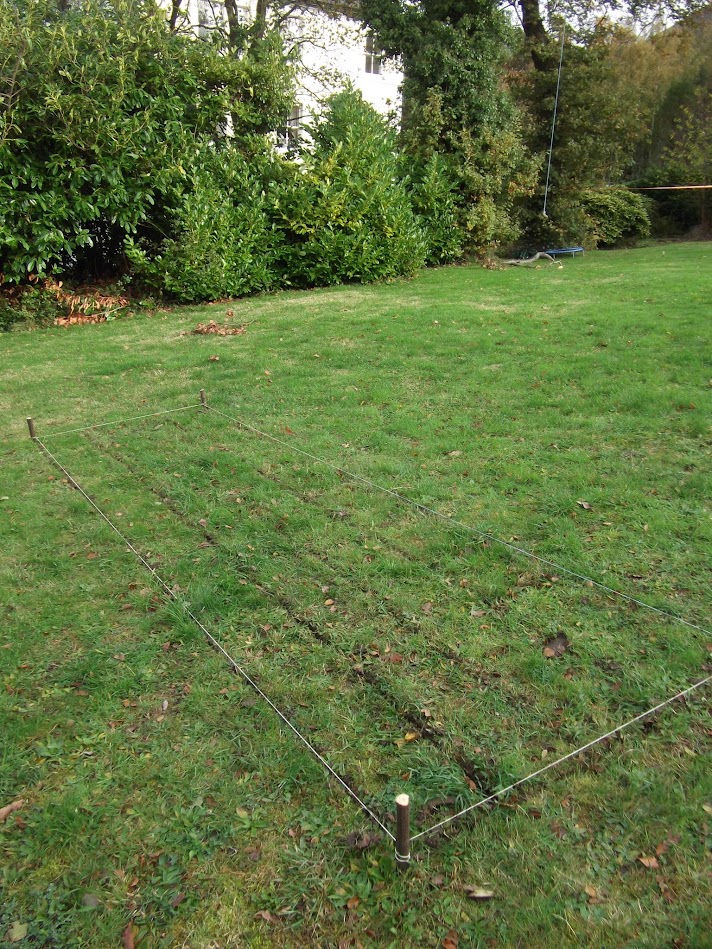 Actually, large numbers of stones, roots and the odd stump of an old bush made it incredibly hard work. 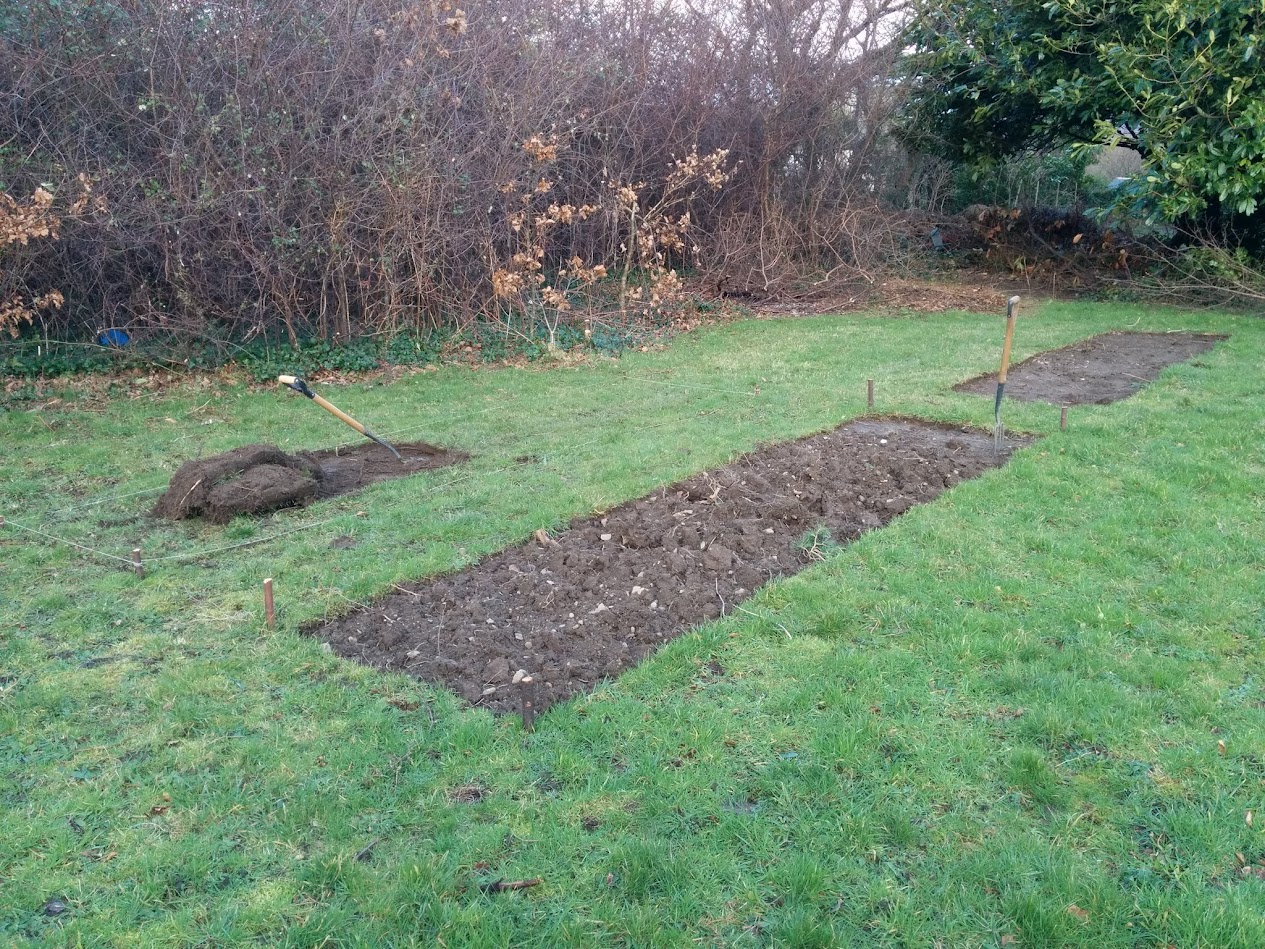 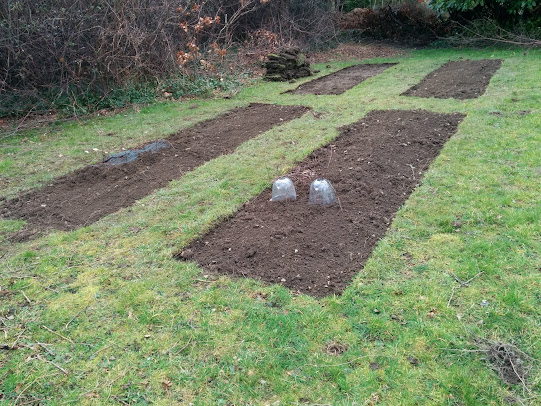 Much turf was removed, much digging was done (including removing all of the stones and roots from two areas which were to contain carrots and parsnips), much netting was spread, but in the end we’ve ended up with some not bad crops: potatoes, broad beans, mangetout, rocket, radishes (very easy; very pleasing) have all made their way into the kitchen so far. 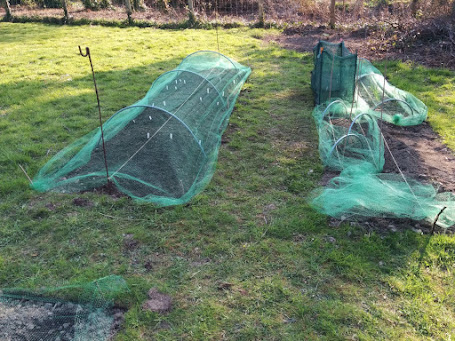 Due to being tight, some sowings didn’t take as the seed was no longer extant. Having seen how cheaply you can buy healthly seedlings though, I’m not sure I’ll bother in the future. Sixteen mangetout seedlings for £3.50? Bargain!

Another plan for the future is to increase the growing area. As mentioned above, it seems my belief that you shouldn’t walk on the soil isn’t necessarily correct, so I will remove the walkways between the beds, which will increase the available plot by 50%, without taking up any more usable lawn. I’m also going to grow more plants, of less varieties.

Moving on to my next attempt at self-sufficiency: the greenhouse.

Lots of people have already had the chance to laugh at the greenhouse’s attempts to escape. It wasn’t funny. Really, it wasn’t.

A greenhouse (albeit plastic) for less than 70 quid sounded like a bargain. I have plans for a grand, sprawling glasshouse with built in solar heating and the like up by the veg plot, but that’s going to be a long way in the future. As an interim measure, a polytunnel-like thing seemed like a good idea. So, it was purchased and erected in March, ready to receive the seedlings which were (not) growing in the office. 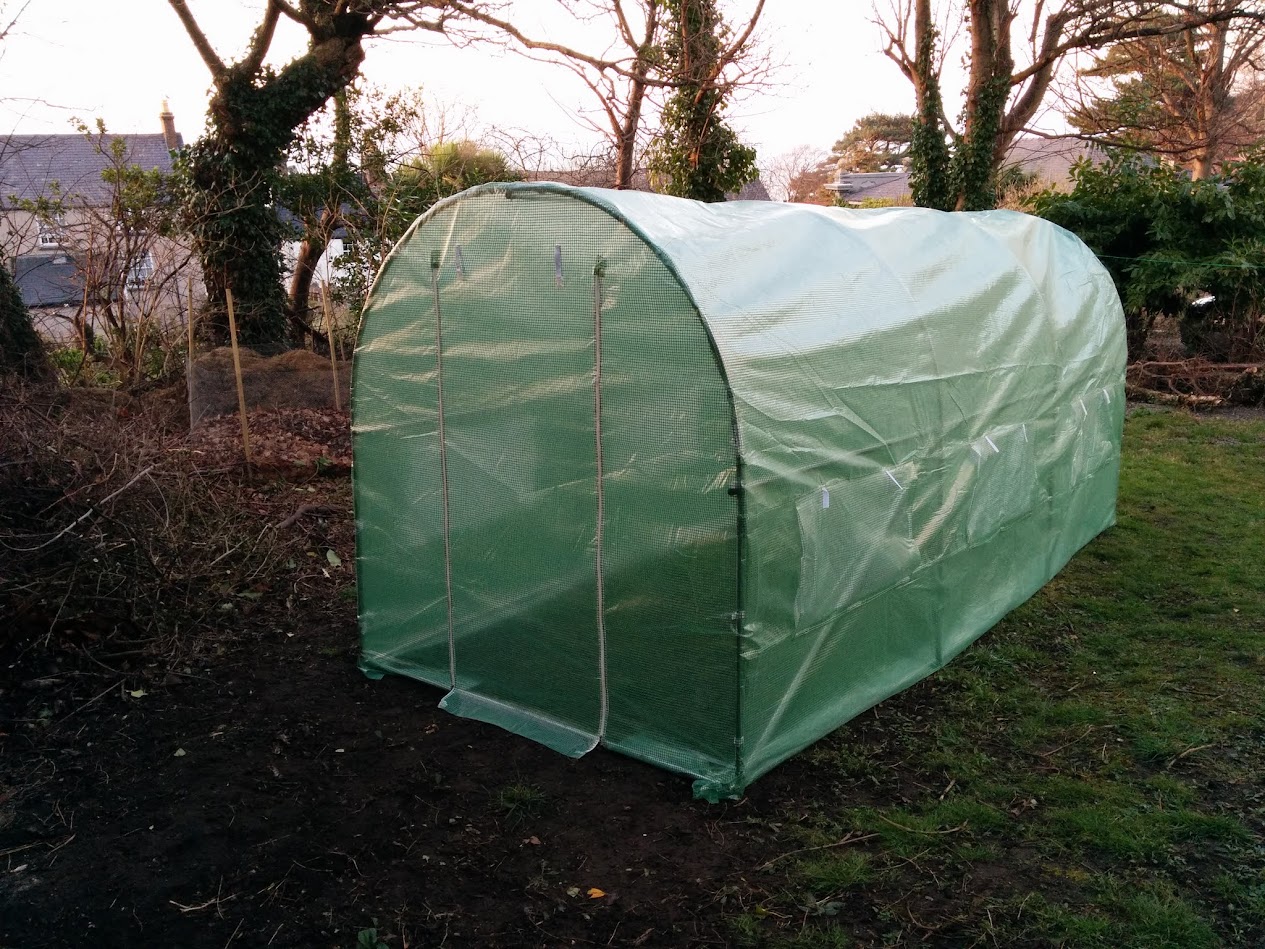 Only hours after it was put up, the wind started. Unusually, it was coming off the hill and going out to sea, rather than running along the coast as it normally does. So my idea of siting it with the short side into the wind was good, but ultimately flawed. 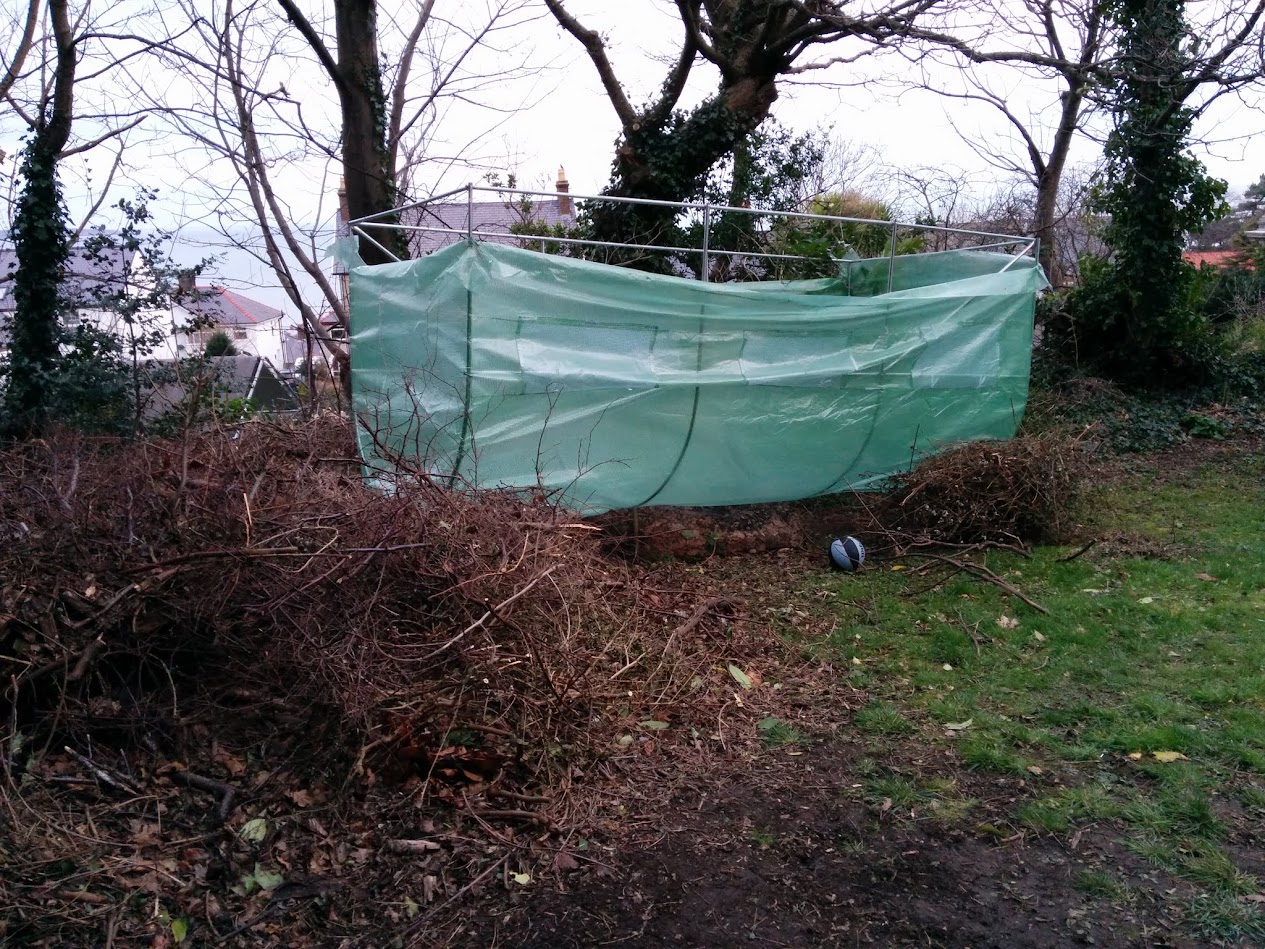 Finding the damn thing upside down when I got up the next morning, I went out and righted it, adding a few more pegs to hold it down. The wind just saw this as a challenge, and ripped it up again. The gale was so strong, it took two of us to stop it flying away, and so down it came.

Reinforcements were required, so it was moved further behind the garage, lashed down with webbing attached to buried concrete sleepers outside, and a concrete gatepost inside, with tree stakes and multiple tent pegs added for good measure. So far, it’s held it, but we seem to be having the windiest year ever, and I’ve lost count of the nights I’ve spent listening to the windows rattling, and assuming the greenhouse will now be somewhere on its way to the Isle of Man.

Once it was up, it’s been used quite a lot. We had another wind incident that knocked everything inside onto the floor, destroying a lot of leeks, sweet peas and tomatoes, but other than that it’s been mostly successful. Still not convinced it’s in a sunny enough spot, but it’s difficult to tell as the weather has been so appalling. 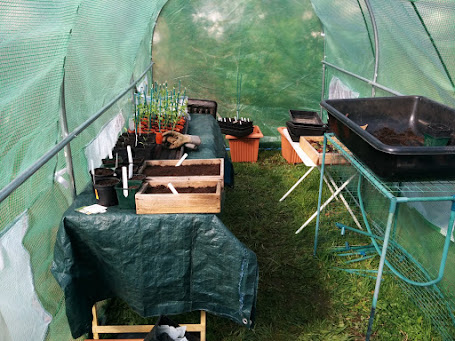 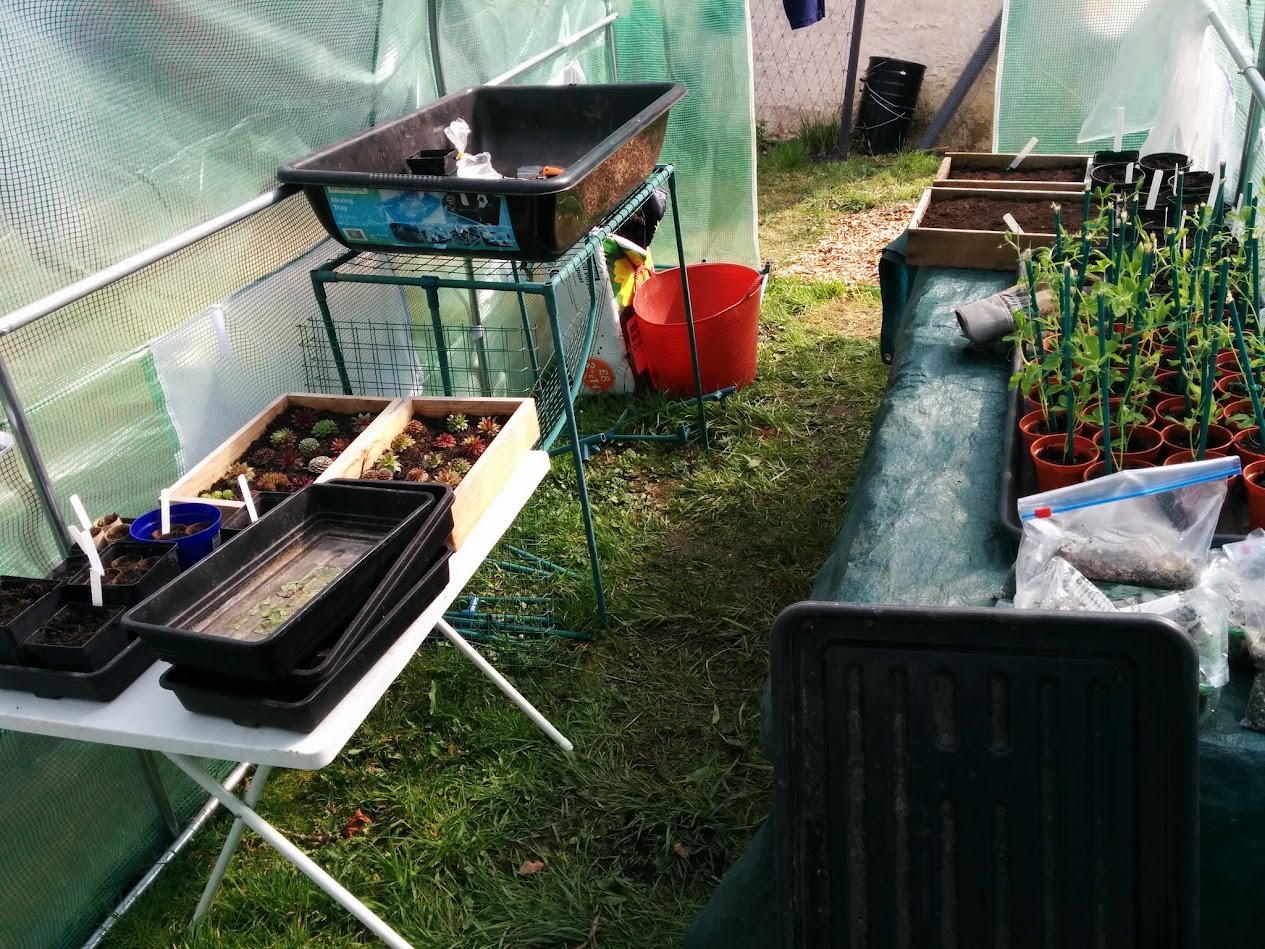 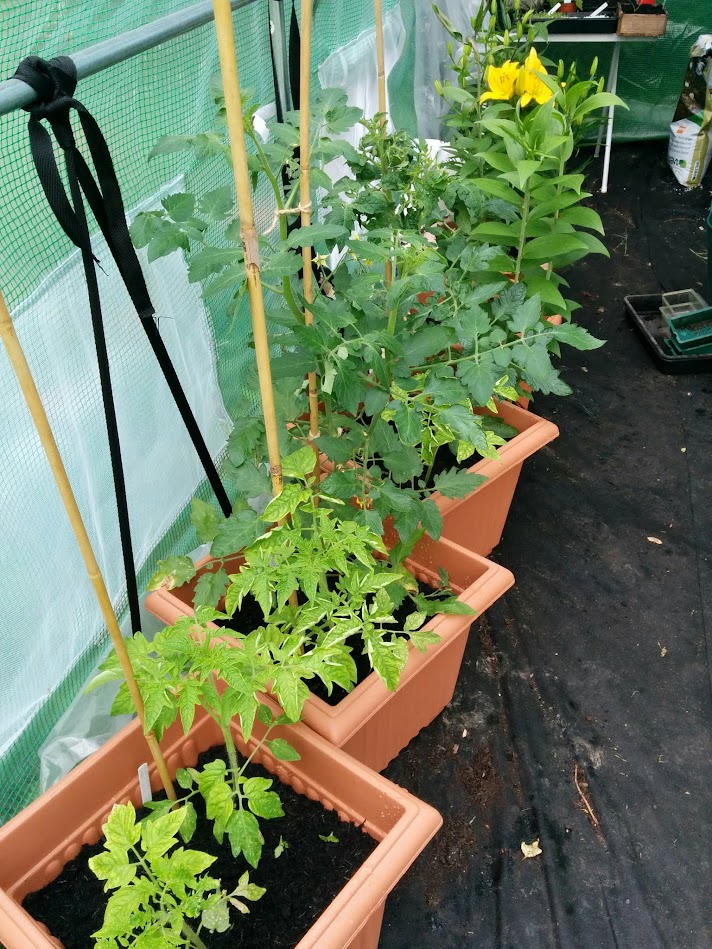 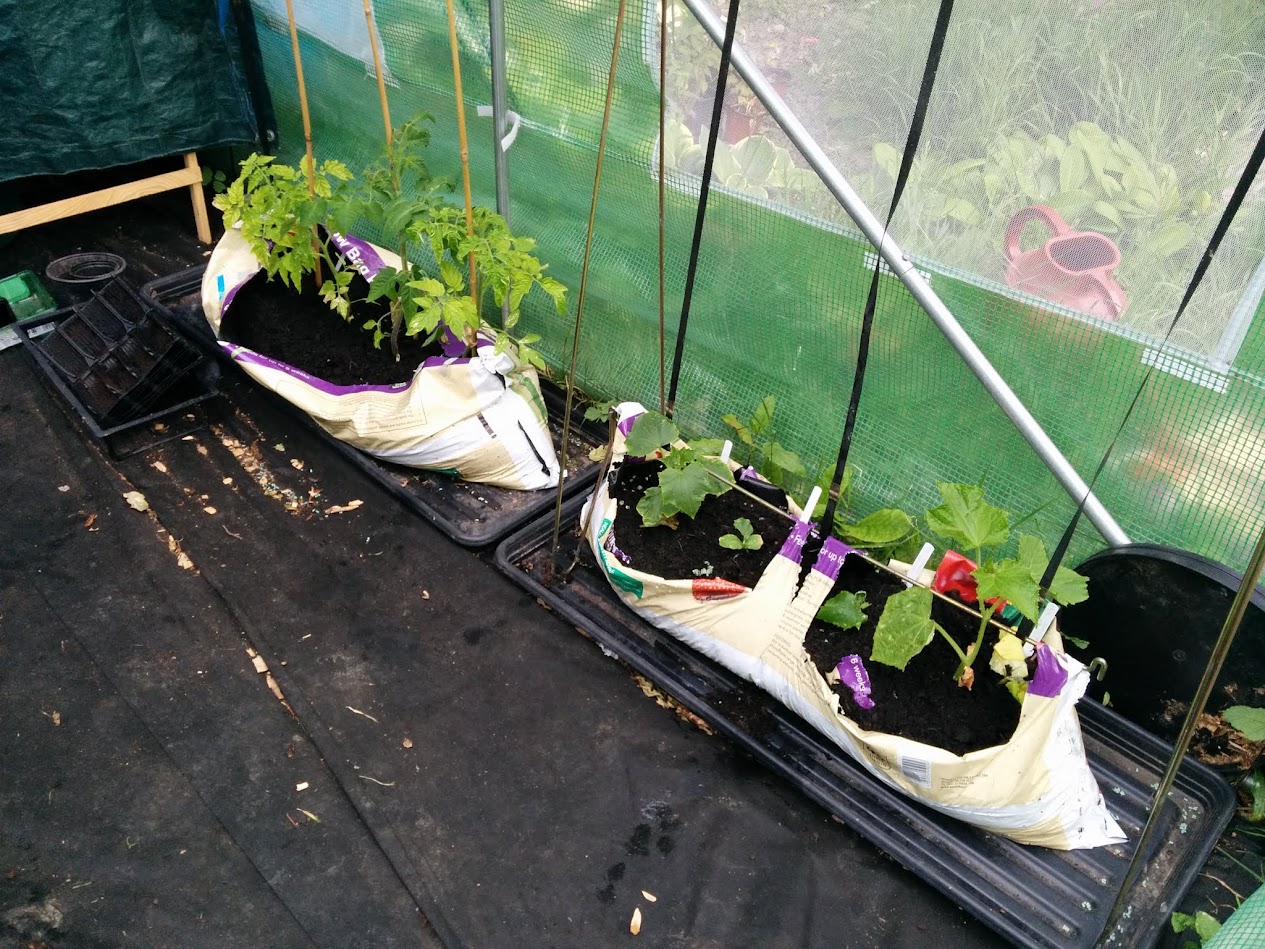 Just waiting now for tomatoes, cucumbers, peppers and cucamelons to ripen. I’m not sure what I’ll do with it when the weather worsens again, as it will be quite a task to take it back down.

Less stressful has been the herb bed. I started this fairly early on, attacking the mass of weeds just outside the door into the garden. It started off just being a place to keep plants that I hadn’t planted yet… 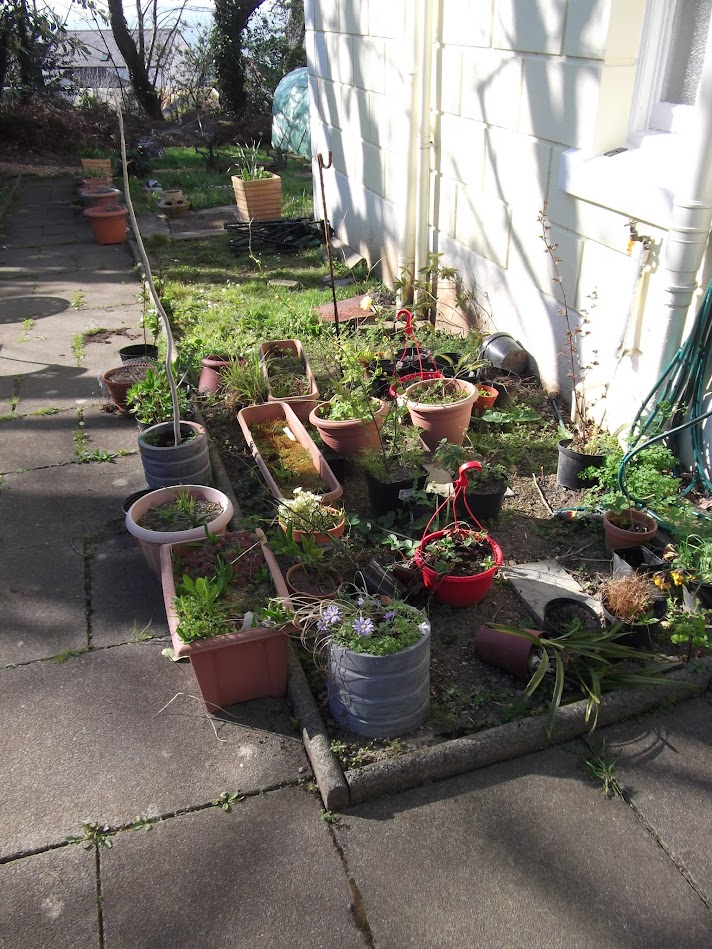 …but now it’s looking much better (if a little regimented: must stop planting things in straight lines!) 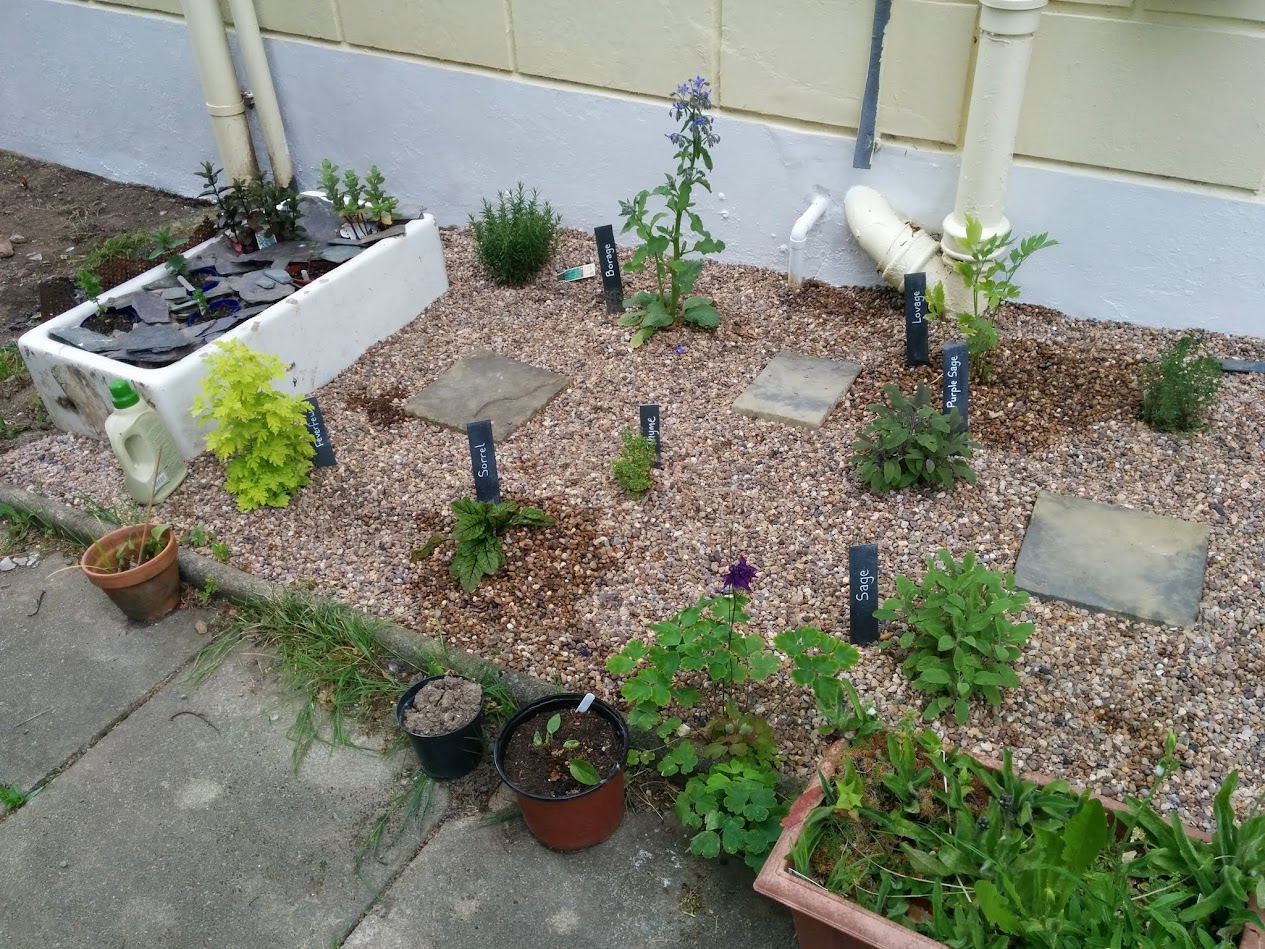 The other side of the door has been turned into an area for pretty potted plants, after the massive holly was massacred (it’s still not dead, as it’s now coming back again!) 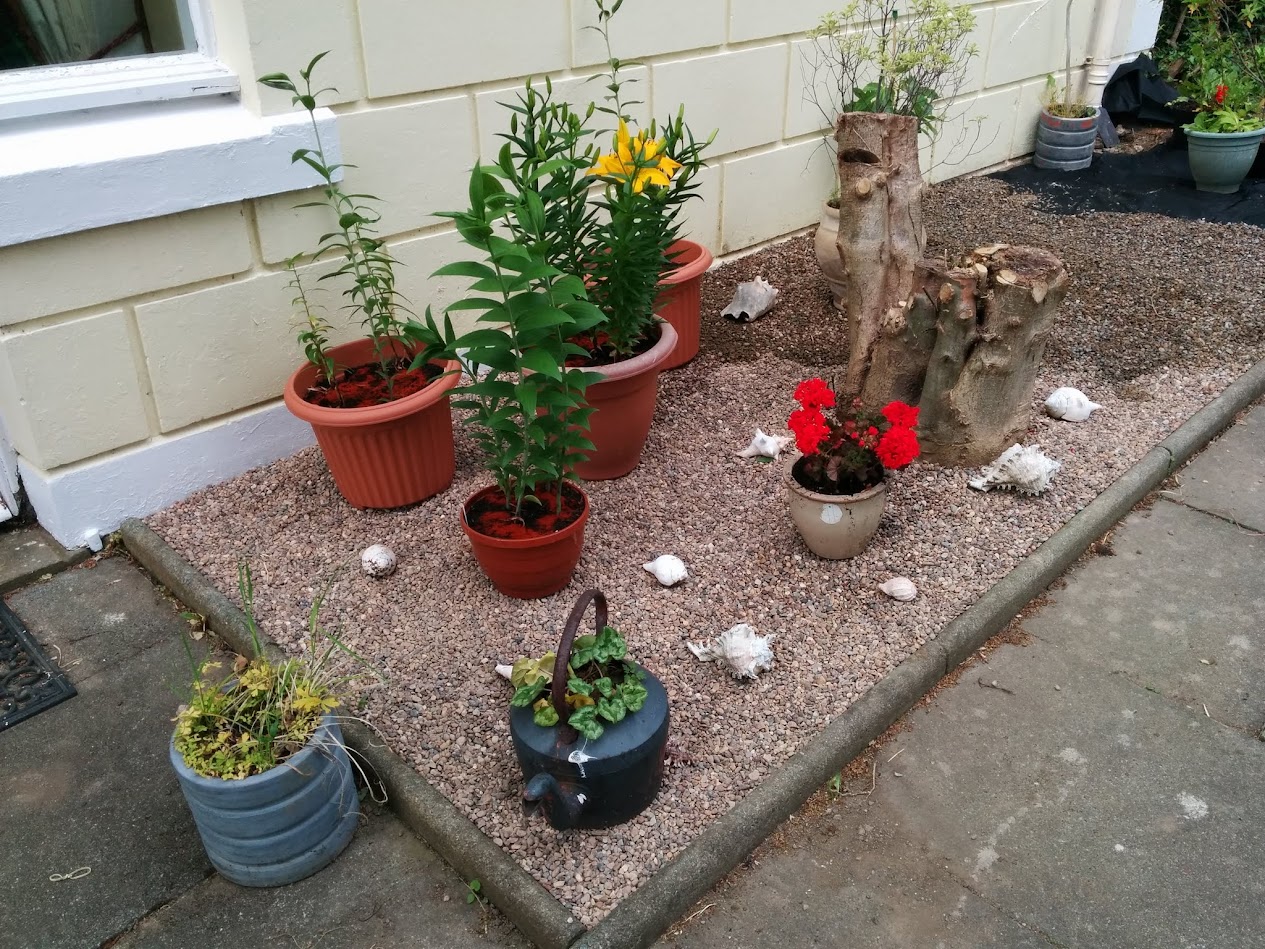 Just realised I haven’t included the hosta bed… This is still a work in progress, so few photos, but the area to the right of the driveway is being transformed. I’m hoping it won’t be too dry, which is a problem we seem to have in lots of places… so many trees! 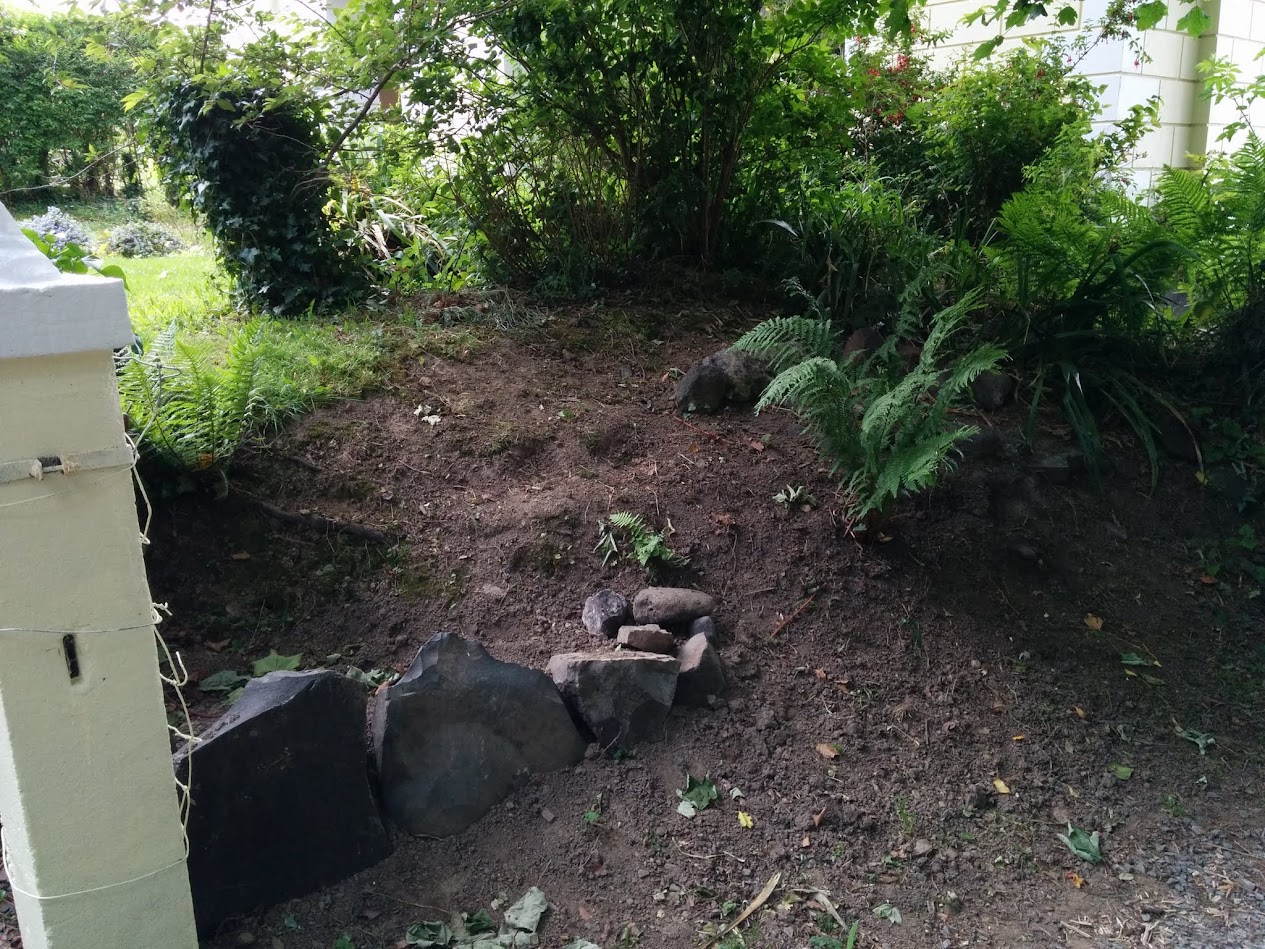 So, that’s it. Lots more to do, but lots already done.